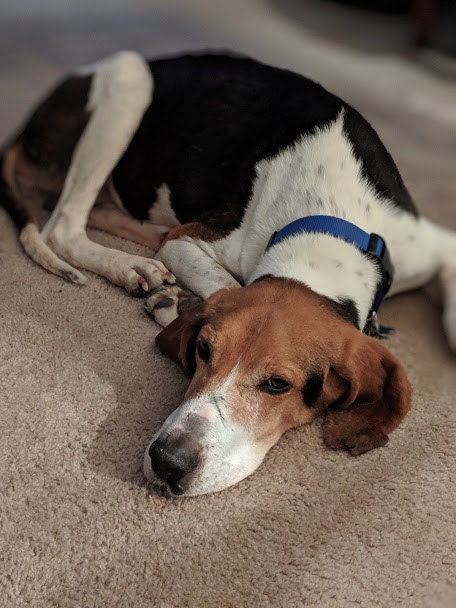 Meet Tony, a treeing walker coonhound from Bladen County, North Carolina. He was found as an abandoned hunting dog after hunting season concluded 😔. It appears he was attacked in the face by some critter causing an injury affecting his sense of smell and rendering him "useless".

With a little luck and some help from fellow rescue organizations, however, I heard about Tony just hours before he was scheduled to be euthanized and worked to get him transported to Mamma Mabel's Inn here in New Jersey.

Because he spent the majority of his life outside and not vetted properly, we learned he was heartworm positive 😭 He has been treating and on crate rest the last 2 months to overcome the hurdle. Just when we thought he was in the clear, he collapsed in my arms one morning. Completely weak with labored breathing, I rushed him to the vet where we discovered old BB pellets in his hindquarters. At first, we thought his blood was being poisoned by the pellets and he immediately received a blood transfusion. One team of specialists later...it was finally confirmed he had a severe case of hookworm!

Tony is now on the mend and although he is not out of the woods yet (see what I did there?) we have high hopes for a full recovery.

Tony is a loving and loyal pup who looks after my 9-year-old and enjoys demanding all the attention. He is getting used to living in a house and discovered he loves broccoli. We think he would make a great therapy dog.

On September 15, 2019, Tony was adopted by amazing new owners. He has made a full recovery and now enjoys his days roaming 5 acres of land and playing with his 3 dachshund siblings.

Melissa Adkins is a certified social media marketer with over 8 years of experience in developing social media strategies. She has used her skills to find 13 "hard to adopt" rescue dogs forever homes in one year. Connect with her on LinkedIn.